In my last article, I described how the Open Compute Project (OCP) Project Olympus server designs have been put into the public domain by Microsoft Azure. Inherent in the Olympus servers is the hardware connection between the ASPEED BMC and the CPU JTAG chain. To make the most of this connection for hardware-assisted debug and test purposes, a high-performance, secure JTAG Master function is needed within the BMC.

BMCs may operate in either of two modes for performing the JTAG mastering function: what are commonly called software mode or hardware mode. Software mode is basically “bit-banging” or “pin-wiggling”, wherein the BMC is made to cycle one TCLK period while driving values on TDI and TMS and returning the value of TDO. BMCs without a dedicated JTAG hardware master burned into their silicon will use software mode, at the cost of poor performance (typically 1-2 MHz sustained TCK, which is suitable for slower applications like test, but unsuitable for debug forensics functions that retrieve a lot of data). JTAG hardware mode acts as an accelerated version of the software mode, by having the JTAG state machine functions in silicon logic, and batching up scans (as from the Xilinx Spartan 6 Configuration Guide): 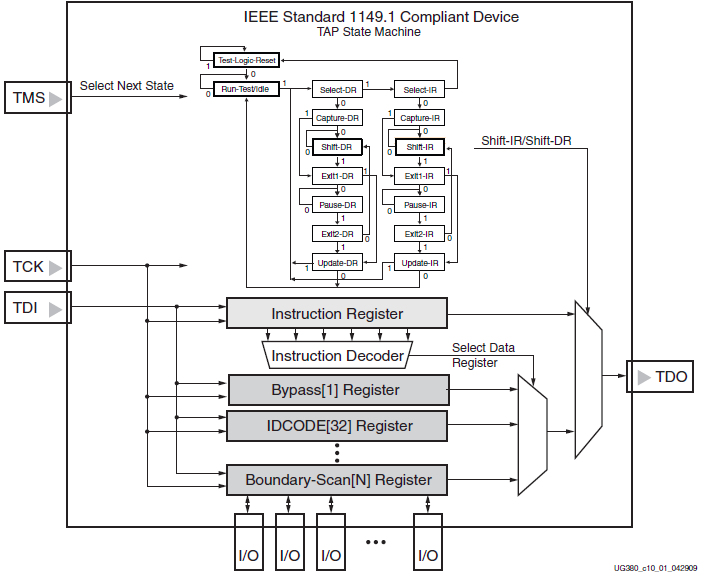 It’s not unusual to have hardware mode operate 10X – 20X or more faster than software mode.

ASSET, being a JTAG company, has of course deep expertise in the technology behind JTAG and run-control. The JTAG Mastering function is built within each of our boundary-scan test (ScanWorks) product controllers, and our hardware-assisted debug and trace (SourcePoint) controllers. We license the intellectual property (IP) behind our JTAG Master to 3rd-party companies that have need of this technology.

On any given design, the ASSET JTAG Master RTL, presents to higher-level functions a simple VHDL port that behaves like a standard Wishbone slave. Alternative ports, such as one that has SRAM-like behavior, are also offered.

Why is this important? Implementing hardware-based engines correctly within silicon, and having the associated driver and library support, provides optimal performance and reliability for debug and test applications. You can read more about how the JTAG mastering function is used for debug in our technical brief, ScanWorks Embedded Diagnostics. The description of test applications can be read about in our eBook, Embedded JTAG for Boundary-Scan Test.