The MinnowBoard Chronicles Episode 27: Segfault on my AMD Ryzen 7 1700X

Last week, I suspected that I might be seeing segmentation fault failures on my new AMD Ryzen 7 1700X computer. I dug into this some more this week, and learned a lot!

I’m pretty conservative when it comes to calling suppliers with problems regarding my electronics at home. I tend to want to dig into the issue and try to figure it out myself, often spending hours in the process. Some might call this a waste of time, but I often learn a lot in the process. And as an outcome, I really know what I’m talking about, when it comes time to call Tech Support. My wife thinks that this inclination is related to my refusal to ask for directions when I’m driving. Fortunately, in this era of Google Maps and built-in navigation systems, the latter is no longer an issue.

So, when my new AMD-based PC started throwing segmentation faults during my Yocto Linux builds (see Episode 26), I figured I should dig into it a little bit first. As I was tinkering around, I got a notification on my Debian 9.1 home page that a new release was available. I clicked on the “Updates” button, and soon enough, I now had Debian 9.2 on-board.

I then jumped in with both feet, and did a build for the Portwell Neptune Alpha, and it succeeded! And I no longer got the warnings about Debian incompatibility, so between the jump to Rocko and the update to Debian 9.2, that somehow resolved itself. Very encouraging!

Emboldened, I backed up and then did a build for QEMU (Quick Emulator). But, it crashed with a segmentation fault!

I then ran several different builds, for QEMU, the MinnowBoard, and the Neptune Alpha; and sometimes it would fail, and sometimes succeed. But mostly it would fail. So, it was time to get more rigorous on this. Having read the articles at Ryzen Is Running Solid Under Linux, No Compiler Segmentation Fault Issue and about the Kill Ryzen script, I began to suspect that maybe there was something wrong with my CPU, and it was an older model. So I used Git to download the Kill Ryzen script, and ran it: 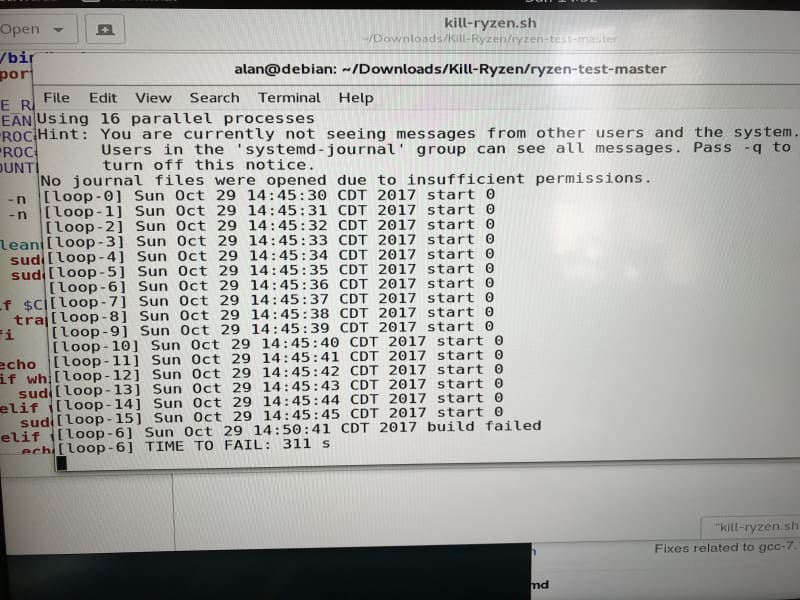 Yes, it crashed after five minutes. And this happened repeatedly.

But the screen shot didn’t say why it crashed. I found from the Kill-Ryzen script README.md that I had to go into the /mnt/ramdisk/workdir/buildloop.d/loop-6/build.log to see the details behind the failure (note that the “6” comes from the signified “loop-6” failure in the screenshot above).

And the failure logged was, indeed, a segmentation fault, as can be seen from the highlighted line below of the last lines in the log:

checking for suffix of executables…

checking whether we are using the GNU C compiler… yes

Makefile:941: recipe for target 'all' failed

So, it is time to contact AMD. I placed a ticket in their online support system. Let’s keep our fingers crossed!

Why am I doing all this? Well, partly it’s a public service, as I’m doing a lot of Linux builds as I explore OpenBMC for the ASPEED AST2500 for our ScanWorks for Embedded Diagnostics product line. In particular, I’m interested in applying boundary-scan test technology on Intel-based servers using the ASPEED BMC. You can read more about the power of in-situ JTAG-based boundary-scan test in our eBook, Embedded JTAG for Boundary-Scan Test (note: requires registration).