As we’ve covered in some previous blogs, the differential,
AC-coupled nature of PCI Express allows this bus to be somewhat self-healing,
whereby some structural defects will allow the bus to transparently run, albeit
at a degraded performance. Due to this, these short-circuit and open-circuit
defects may be completely masked from conventional functional test. But such
defects are important to detect, because they will affect the throughput of the
port. Boundary scan can be used to detect these defects, subject to the
implementation of IEEE 1149.1 and IEEE 1149.6 in the chips.

As we saw summarized in Structural Defects on High-Speed Serial I/O – Part 3, some
shorts and opens will cause a link to run at a degraded performance, with lower
margins and higher bit error counts. For example, a single open due to a
missing capacitor, or a short between Tx1+ and GND or between Tx1+ and Tx2+
will have this effect. That’s why these defects are so nefarious; they may be
invisible to conventional manufacturing functional or system test, and then
only cause problems subsequently out in the field. But, it would seem that
boundary scan should be able to detect such defects with 100% reliability,
right?

Well, the answer to that question is highly dependent on the
implementation of IEEE 1149.1 and 1149.6 (AC-JTAG) within the associated chip.
Let’s first look at an example by considering a processor chip with PCI Express
gen3 out to an unpopulated PCI Express connector: 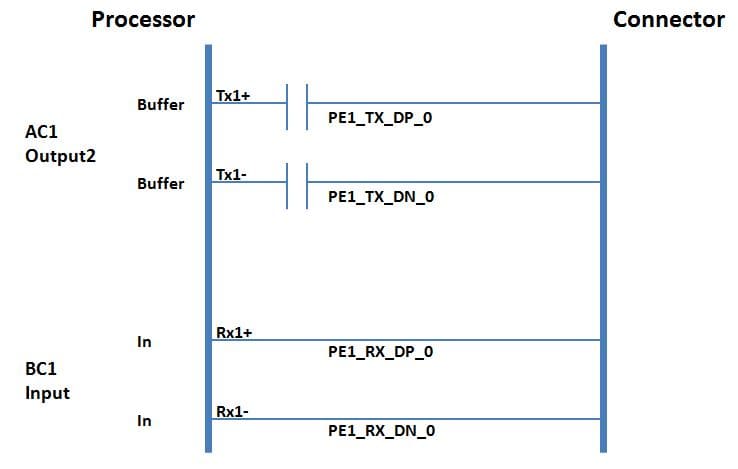 It is worthwhile to note that the PCI Express specification
requires that the AC coupling capacitors be as close as possible to the
transmitter buffers, so they will be on-board the printed circuit board where
the processor resides in this diagram. The other coupling capacitors for the
processor receive buffers will be on the PCI Express add-in card.

Also, since the PCI Express slot in this example is
unpopulated, the two Rx1+ and RX1- lanes are open; that is, they are in a high-Z,
or tri-stated high impedance condition. In other words, they are not being
driven to any defined logic level.

Now let’s look at an excerpt from the hypothetical BSDL file
for this processor, for PCIe lane 1:

(from the AIO pin
behavior statement):

What’s going on inside the processor chip, per this BSDL,
can be seen diagrammatically: 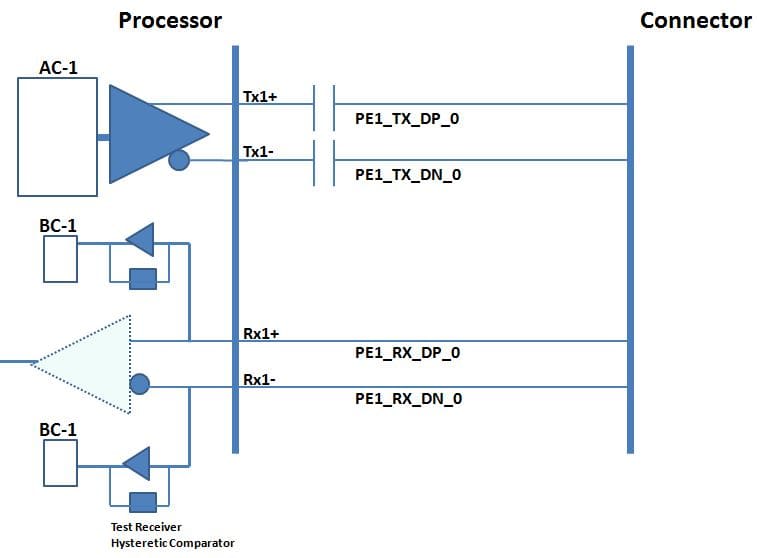 There are several useful things to note here regarding a
static DC-only level-sensitive boundary scan implementation for IEEE 1149.1:

So the boundary scan test coverage on PCIe is categorized as
“Class 3”: some coverage on stuck-at 0 or 1, but not much else.

Things get interesting when we put a passive loopback card
(which connects transmit nets to receive nets) and use some of the features of
IEEE 1149.6 (AC-JTAG) to these nets. This gives us shorts and opens test
coverage on both the component side and connector side of the bus. 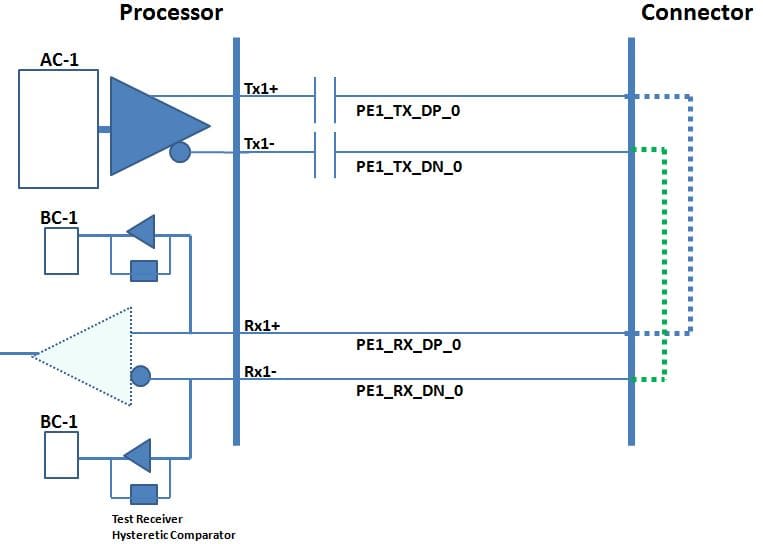 Any opens on either the board, connector or add-in loopback
card due to missing BGA balls, connector plated through-hole issues, etc. will
be detected as normally by IEEE 1149.6.

Of course, if there are shorts between Tx1+ and Tx1-, or
between Rx1+ and Rx1-, no signal will go out on these differential pairs, and
the lanes will fail. A clever 1149.6 interconnect test which detects edges on
the receive side of the looped pair will now see the lack of an edge, and
isolate the fault.

So a prescribed boundary scan test sequence for PCI Express
would consist of:

The only defects that might escape from this methodology, of
the Tx1+ to Rx1+ and Tx1- to Rx1- type, could then subsequently be detected
with either processor-controlled test and/or HSIO.