Those of you with a telecom background are no doubt aware of the “OSI Network Model”, also known as the OSI pyramid or stack. It is a way of sub-dividing a communications system into smaller parts called layers. A layer is a collection of similar functions that provide services to the layer above it and receives services from the layer below it. A decade ago, the telecommunications test industry underwent a revolution when platforms emerged that could cover multiple layers of the OSI stack. Now, the same thing is happening in the circuit board test industry… 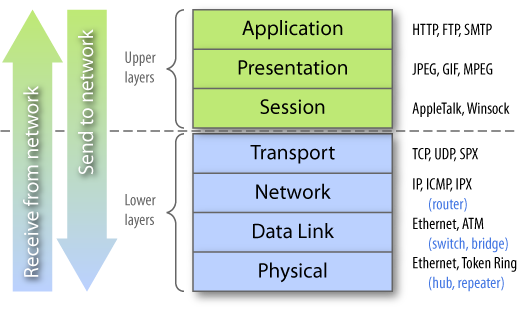 A simplistic example of the OSI stack and its interactions can be illustrated by a simple web session between a client computer and a server. At the Application layer the end user launches a browser and types in something like http://www.asset-intertech.com. This flows down through to the Session Layer, which manages inter-host communication through for example a routing protocol like BGP-4 or OSPF. The traffic is in turn encapsulated within TCP/IP segments/packets, which establish the reliable end-to-end connection with flow control. Finally these are encapsulated within, for example, Ethernet frames and sent over a physical wire or other medium.

Why the OSI tutorial? Well, it’s simply to illustrate the point that testers which can exercise multiple layers of the OSI stack have an advantage over “one-trick-pony” testers. An example of this is Spirent’s Avalanche product line (http://www.spirent.com/Solutions-Directory/Avalanche.aspx), which provides stateful testing of Layers 4-7 at very high line rates. In other words, the Avalanche product can test devices to their ultimate limit, correlating data across the layers and determining a device’s performance under worst-case scenarios of network traffic, faults and attacks.

The same principle also applies in the testing of printed circuit boards. It is no longer sufficient for a tester only to test a design for structural defects, functional faults, or performance issues. The “perfect” tester should be able to exercise all three types of testing and collect and correlate data from each: 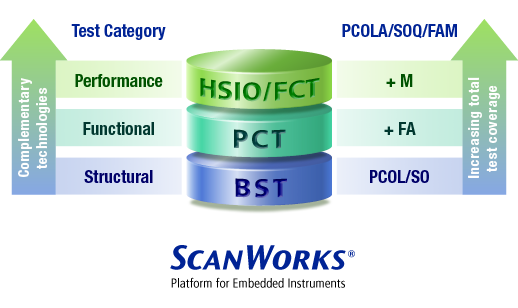 A test technology application like boundary-scan test (BST) is known to detect structural defects. Within iNEMI’s PCOLA/SOQ/FAM framework, BST covers off PCOL/SO (see my Blog at https://blog.asset-intertech.com/test_data_out/2010/12/structural-versus-functional-test.html for more information on this).

A functional test technology application, like processor-controlled test (PCT), will provide Feature and At-Speed (‘F’ and ‘A’) test coverage in addition to some level of PCOL/SO coverage. So from a test coverage perspective, Functional Test is better than boundary-scan based structural test; but in some cases boundary scan may provide a higher level of diagnostic granularity.

Finally, performance technology applications like Intel HSIO or IJTAG-based FPGA-Controlled Test (FCT) provide the Measurement (‘M’) test coverage attribute. This is the best type of test in the context that it can measure parameters such as voltage and timing and thus provide defect coverage in excess of what can be provided by any other means. In many cases the diagnostic granularity can be comparable as well. Over time, the amount of a given PCB that can be covered by these types of tests will grow.

Having these structural, functional and performance test attributes all running under one software platform, ScanWorks®, is a revolution materially the same as what the telecom industry experienced nearly ten years ago. Being software and embedded instrumentation-based, it also offers: