Today, I learn more about Intel Architecture and UEFI on the Minnowboard, by using the built-in commands and macros within SourcePoint.

SourcePoint has a very powerful built-in programming language that is very similar to ‘C’. This language gives access to a plethora of commands for JTAG-based run-control, target access, dumping of registers/memory/IO, etc. These allow for command-line control of the debugging environment, as well as creation of scripts for automation of often-repeated tasks. The command language complements source-level debugging, and is particularly useful for hardware qualification and validation. The command language primitives in fact form the foundation of a lot of the SourcePoint functionality, such as the Intel CScripts. 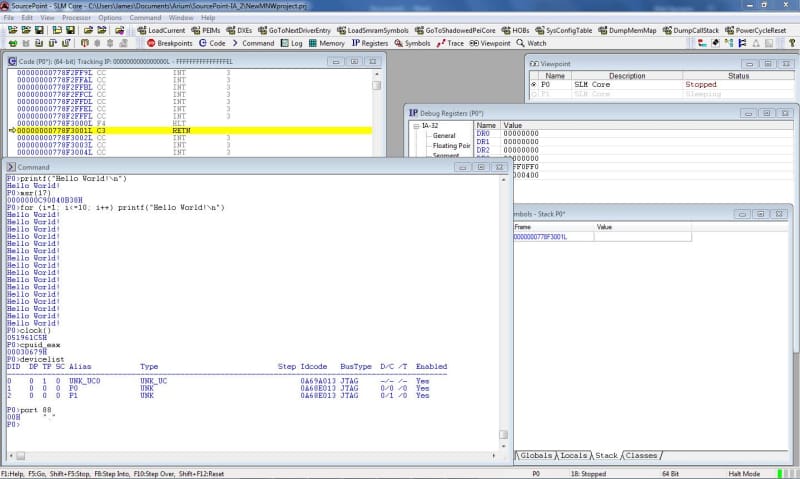 The first command issued was invoked by simply typing in:

Anyone familiar with ‘C’ will recognize this statement. As expected, it prints out “Hello World!” to the console.

The following command, msr(17), prints out the contents of the mode-specific register at address 17H. Those familiar with Intel Architecture may recognize this as the MSR_PLATFORM_ID.

The next command, cpuid_eax, executes the assembly language CPUID instruction and returns the result in EAX (and to the screen). You can see that the result is ‘30679'H.

“devicelist” displays the attributes of the devices in the chain known to SourcePoint. The uncore and the two device cores are visible.

Of course, it is possible to create command macro text files which contain multiple commands. Creating command files helps to automate oft-repeated operations. Command files are also referred to as macro files, script files or include files. There are several ways to execute a command file:

An example of a macro file which reads the Bay Trail-I MSRs up to ‘6E0’H consists of only seven lines:

The results can be compared against the MSR definitions for the Silvermont architecture, which are also contained in the Intel Software Developers Manuals. Pretty cool, huh?

To have a look at the SourcePoint GUI, go here.

More information on SourcePoint Command macros can be found here.

Use of the SourcePoint command environment to invoke the Intel CScripts is found in our eBook here (note: requires registration).

You can see the prior Minnowboard Chronicles here: Episode 8.