For almost three decades the JTAG or boundary-scan standard (IEEE 1149.1) has been a workhorse, but let’s face it, there are some functions it was never intended to perform and, as a result, it doesn’t do them well. It certainly has been a great access mechanism for testing circuit boards and in-system programming. But, over the last five years or so, as more and more IP in the form of embedded instruments has been integrated into chips, the JTAG standard has frayed a bit around its edges. Specifically, the explosive proliferation of embedded instruments has challenged JTAG with regards to issues such as scalability, IP portability, sustainability, ease and efficiency of operation of embedded IP, and others.

Clearly, another standard developed from scratch to serve the newly emerging requirements of embedded instruments was needed. Consequently, the IEEE 1687 Standard for Access and Control of Embedded Instrumentation within a Semiconductor Device, or more commonly known as Internal JTAG (IJTAG), was developed, not to replace JTAG, but to supplement it with the flexibility, re-configurability and functional features that would make working with the myriad of embedded instruments we now see in chips and on circuit boards easier and more effective. 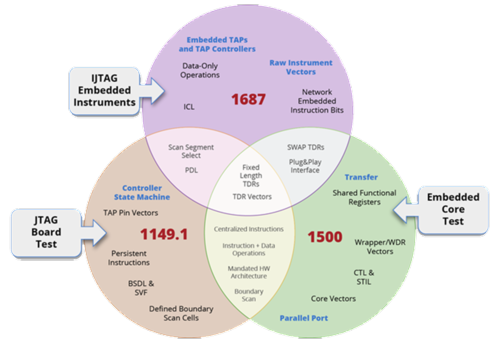 More and more engineers are relying on embedded instruments to perform functions throughout the life cycle of chips and systems, functions like characterization, verification and various operational monitors at the chip level, and, on circuit boards, test, validation, hardware debug, chip programming and many others.

Of course, change is always difficult. Some in the industry thought: Let’s just add to the JTAG standard, even though the use cases of embedded IP require functionality never imagined three decades ago when JTAG was ratified. Others thought a new standard dedicated to the requirements of embedded IP, but which also took advantage of JTAG’s capabilities, would be more effective. This latter position resulted in the development of IEEE 1687 IJTAG.

Still, it’s a confusing situation. So, we recently added greater depth to one of our most popular eBooks, “IJTAG vs JTAG vs IEEE 1500 ECT | Technical Tutorial – 2nd Edition.” 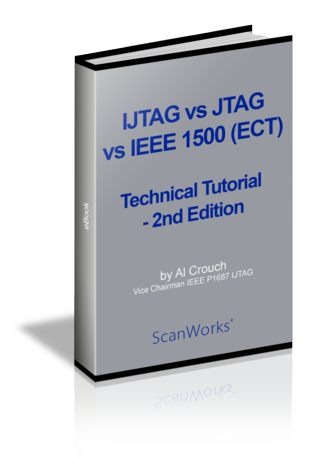 In the second edition you’ll learn not only about the use cases where IJTAG and JTAG shine, but also the IEEE Embedded Core Test (ECT) Standard. As the illustration below shows, each one has its own strengths. Download this free eBook, "IJTAG vs JTAG vs IEEE 1500 ECT | Technical Tutorial – Second Edition"