Just this past week, Intel announced the Innovation Engine, a small Intel architecture processor and I/O sub-system embedded into their upcoming generations of server platforms. What is its purpose, and what new applications can run on it?

At this past Intel Developers Forum (IDF) in San Francisco, Intel unveiled some preliminary information on the new Innovation Engine (IE). In a nutshell, the IE is an embedded processor which allows system builders and their partners to build unique, differentiating firmware for server, storage, and networking markets.

Differentiation has always been, and always will be, a key challenge for OEMs in the Intel space. Hardware, in and of itself, is very common across platforms designed with Intel silicon. There can be some differentiation based upon using some custom Intel SKUs (if you are a large enough customer), or designing circuit boards which deviate from the platform design guideline recommendations, but these come at a high cost – either in terms of Bill of Materials (BOM) cost, or risk of having a product with lower overall operating margins.

Competitive advantage on Intel designs often comes from the embedded firmware, either the BIOS or the Baseboard Management Controller (BMC) code. And in the server world, OEMs are often beholden to the UEFI vendors for customization. So OEMs often invest in customization of system management to create differentiation – which is where the IE comes in.

The IE can supplement or replace much of the functionality that may exist on today’s BMCs. In addition, for lower-end systems that may not require BMCs, the IE can provide a platform which delivers system management capabilities at no extra BOM cost. In Intel’s words, “some possible uses include hosting lightweight manageability features in order to reduce overall system cost, improving server performance by offloading BIOS and BMC routines, or augmenting the Intel® Management Engine for such things as telemetry and trusted boot.”

Things get really exciting, though, when new, innovative features are delivered on the IE. One such application is ASSET’s ScanWorks Embedded Diagnostics (SED). SED provides for the capability of a complete validation, test and debug suite embedded within the system, as opposed to requiring access via external cables, hardware probes, and fixturing. You can read more about SED here.

For SED, for some applications (such as Trace features), the IE requires only a firmware addition, to access such resources as Trace buffers. For other applications, such as boundary-scan test, it must access the JTAG scan chain. Intel run-control based features require access to a subset of XDP signals, as described in the table below: 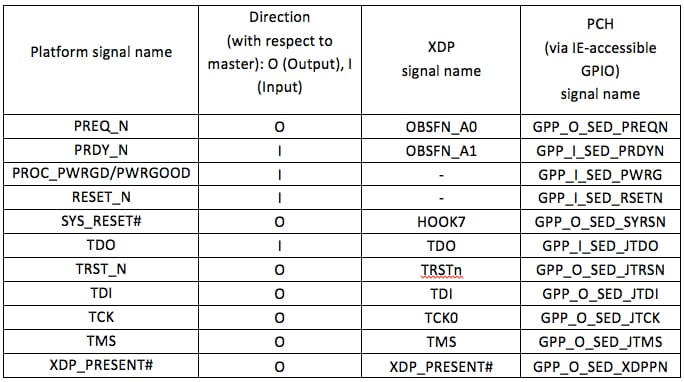 Ultimately, the IE represents a new platform for innovation on Intel designs, which will have benefits for OEMs and their customers alike.