Last week we saw a $300,000 oscilloscope. This week, we look
at another one for $470,000. The sky’s the limit when it comes budgeting for
‘scopes. But aside from the price, what other advantages are there of embedded
instrumentation-based system marginality validation tools?

As we saw last week in the blog Signal Integrity Validation (SIV) versus System Marginality
Validation (SMV), oscilloscopes are used to perform SIV, and software-based
tools like ScanWorks perform SMV. As high-speed buses have gotten faster and
faster, the cost of oscilloscopes has risen exponentially, due in part to the
hardware technology within them. A 33GHz Agilent DSOX93204A
Infiniium oscilloscope costs
$300,000. And the faster scopes, such as the 63GHz Agilent DSAX96204Q, cost EUR
359,980 ($470,000 by today’s exchange rate). Once you add in the cost of the software
options, probe heads, amplifiers, and other paraphernalia, the price goes well
over half a million dollars.

And apart from the capital cost avoidance and labor
reduction associated with software-based tools vs. oscilloscopes, the software
tools also provide functionality that simply cannot be replicated by the legacy
“heavy iron”. One example of this is automated shmooing of BIOS programmable
equalization settings. For SATA 3, for example, the Discrete Time Linear
Equalization (DTLE) of the receiver must be adjusted to take into account the
different margins associated with different vendors’ hard drives, solid state
drives, different cables, whether they are hooked up directly to the
motherboard versus through a 6” cable, etc. A simple demonstration of this can
be seen with a notebook design which has a default DTLE setting of 2 within the
BIOS, which might favor a hard disk drive. The ScanWorks margin graph of this configuration
is as follows: 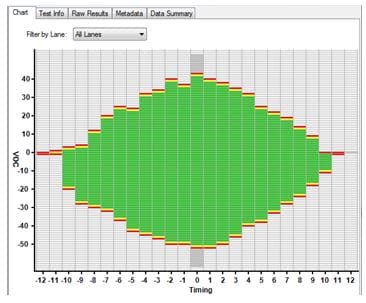 Switching out the hard disk drive (HDD) to a solid state
drive (SSD), unfortunately, yields a margin result which is nowhere near as
favorable: 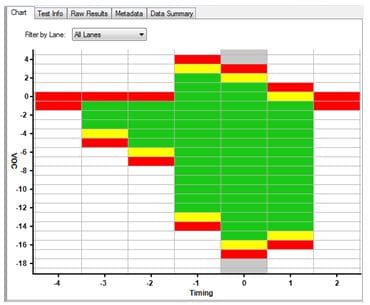 The problem here is that the default DTLE setting favors the
hard drive, which gives off quite a bit of EMI compared to the flash drive. The
DTLE would need to be adjusted to tune the design to accommodate either an HDD
or a SSD and give acceptable margins for both. Otherwise, the solid state drive
will not perform at its potential; it will run slower than intended, and may
even be subject to intermittent link failures (i.e. the OS loses the drive).

Tuning the DTLE with an oscilloscope is an entirely manual
process, and could take weeks of effort. With ScanWorks, DTLE settings can be
automatically swept through a range while simultaneously taking voltage and
time margins, to yield the optimal value for all sorts of SATA devices, from
different vendors, and operating at different speeds. This level of validation
gives confidence across multiple possible customer configurations, and is
simply not possible with an oscilloscope.