First debugger to support all of Intel's embedded trace facilities

ASSET’s SourcePoint® is the first debugger to take advantage of all of the trace facilities embedded in several of Intel®’s most advanced processors, including those based on the microarchitecture codenamed Skylake for 6th Generation Core and Intel® Xeon® processor E3 v5, as well as several other microarchitectures not yet made public.

“Intel has been embedding trace debug engines and features into its processors to make the developer’s job easier. Now, with SourcePoint, developers at last have a debug platform with trace and static debug tools which capitalize on Intel’s trace capabilities like Intel Trace Hub and Intel Processor Trace,” said Larry Osborn, ASSET’s product manager for SourcePoint. “Powerful trace methods can quickly find the root causes of bugs in complex software, including UEFI (Unified Extensible Firmware Interface) code, because of the deeper level of visibility into code execution provided by trace.”

Intel Trace Hub captures trace data from various internal sources in Intel processors, such as the Management Engine (ME), Architectural Event Trace (AET), System Trace Messaging (STM) and others. This data can show the interaction between hardware and software, and the behaviors that result. Intel Processor Trace provides real-time instruction execution trace of the main symmetrical cores and speeds up the trace process tremendously by eliminating almost all of the effects of data gathering on processor performance. The powerful combination of these two features provides the ability to correlate system symptoms with root causes within the execution trace store.

Depending on which debug protocol is specified in a particular Intel Customer Reference Board (CRB), the new version of SourcePoint will connect to an Intel design via either ASSET’s Closed Chassis Controller (CCC) with its USB interface or the ECM-XDP3e, which features the 60-pin XDP interface.

In addition to the most advanced trace tools in the industry, certified users of ASSET’s SourcePoint for Intel debug platform now have access to a support website containing valuable and proprietary information from both ASSET and Intel. On this website, users under a multiparty non-disclosure agreement can find the latest Customer Scripts (CScripts), which help bring up new designs faster, Customer Advisory Bulletins (CAB), target configuration files, User Guides, tutorial documents, training videos and much more.

“We put a lot of time and effort into certifying our tools against Intel platforms and sharing with our users immediately any problems we identify with the debugging process,” Osborn pointed out. “In many cases, we are able to have a fix and documentation to the community before users realize there may be a problem.” 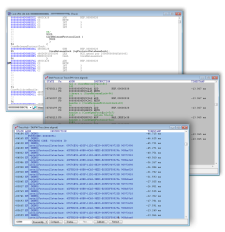